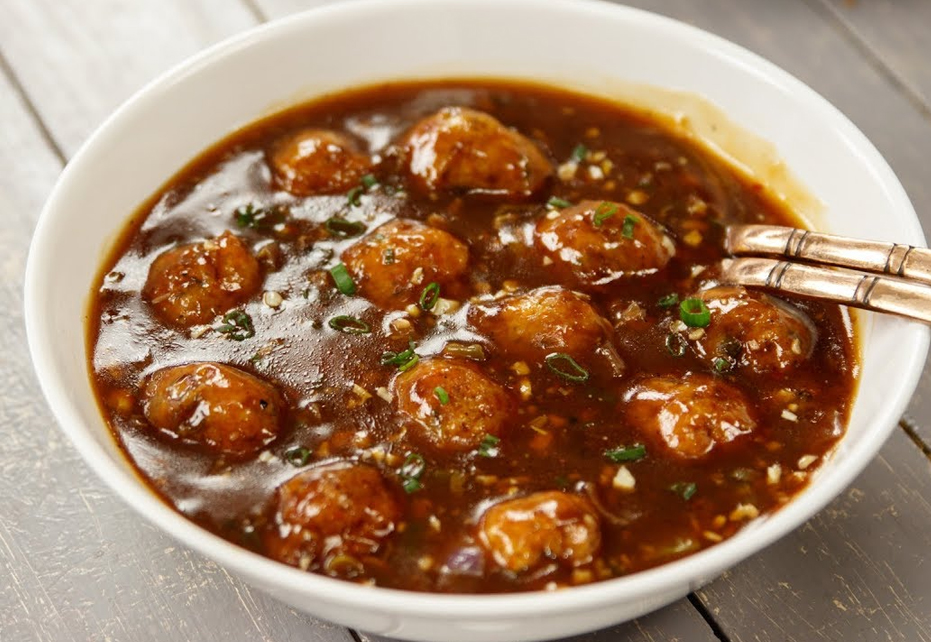 Veg Manchurian is a delicious Indo-Chinese dish made with wisps of vegetables formed into dumplings and dunked into a sauce with a gorgeous interplay of hot, sweet, sour and salty flavors. It’s a dish you’ll be treating yourself to again and again. Vegan, nut-free and can be gluten-free.

Indo-Chinese food has a long history in India, and one of its most delicious chapters is doubtlessly the manchurian.

This dish of vegetable dumplings in a glossy, rich-brown sauce with bold notes of tangy, sweet, spicy and salty is impossible to resist and I can honestly say I’ve never met a man, woman or child who could walk away from a plateful. In fact, if you ask an Indian what his or her favorite Indo-Chinese dish is, chances are, it would be a Veg Manchurian.

Indo-Chinese cuisine arrived in India long before the country’s whole-hearted embrace of capitalism in the 1990s brought other global cuisines–and American restaurant chains–knocking at its door. It is said to have originated in Calcutta in the 19th century, when Chinese immigrants seeking work arrived in what was at the time the capital of British India.

Hungry for the tastes of home, the immigrants married ingredients familiar to them–soy sauce, vinegar, noodles, cornstarch–with ingredients of their new homeland, most notably the spices, taking flavor to a whole new level in a country where flavor has always been king.

In Indian dishes, sweet, sour, bitter, salty and pungent are usually balanced to merge into a common deliciousness and richness without drawing attention to their individual selves. Not so with Indo-Chinese cuisine. You could taste the salty, the sweet, the spicy and the tangy in each dish. And they did such a happy dance on your tongue that you not only didn’t mind, you wanted more. And more.

In time, Indo-Chinese cuisine also became an Indian street food stalwart. You could order a plate and watch as the vendor flopped ingredients into a large wok and stirred up the magic right in front of your eyes. And it was so delicious, Indian expatriates took it with them around the globe. You can now find Indo-Chinese restaurants in nearly any community in the U.S. or around the world where there are large numbers of Indians, including here in suburban D.C.

For the manchurian balls:

For the manchurian sauce: